Due to ongoing concerns relating to COVID-19, the Papay shop continues to operate at reduced opening hours and for limited customers at a time. The shop will still continue to take orders for delivery / collection. Click Shop for more details.

The Hostel is open for new bookings, although current visitor capacity is reduced. Click Hostel for more details.

Bookings for Papay Tours and visits to the Holm of Papay during 2021 are open, although start dates are not yet decided.

Papa Westray, known affectionately as Papay, is one of Orkney's smallest isles lying some 20 miles north of Kirkwall. Papa Westray has a maritime climate with the Atlantic Ocean on the west and the North Sea to the east. Just 4 miles long by 1 mile wide, Papay is a fascinating and diverse place to visit, steeped in history but with a lively population which has increased from 65 in the 2001 census to 90 'usual residents' in the 2011 census. The map below comes from Google. It is best viewed by clicking 'View Larger Map'. 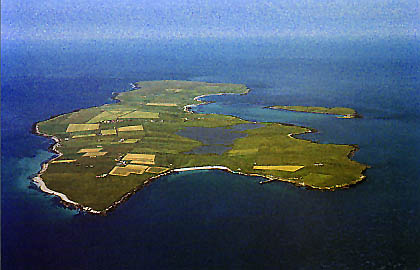 Papa Westray from the south - photograph by Anne Hourston

Papay is green and fertile and because of this has been home to farming activity for at least 5,000 years. Today, farming is still one of the main activities of the islanders, especially the production of excellent beef cattle. Holland Farm maintains a fine range of traditional stone buildings including a doo'cot,horse tramp mill, a kiln and also an agricultural museum. Local folk are also involved in lobster and crab fishing, art, building, crafts, tourism, writing and computer-based work - and essential island services such as the airport, community co-op, pier, nursing and fire service.

Historic Scotland lists nearly 60 archaeological sites on Papa Westray, an astonishing testimony to the immense period of human habitation. The most significant include: 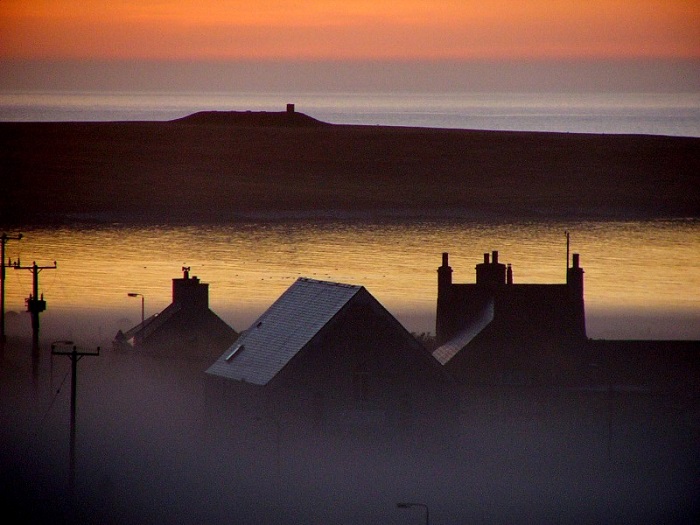 The Holm from Papa Westray - photograph by Douglas Hourston

Holm of Papay - offshore islet with a number of remains, including a Neolithic chambered tomb. 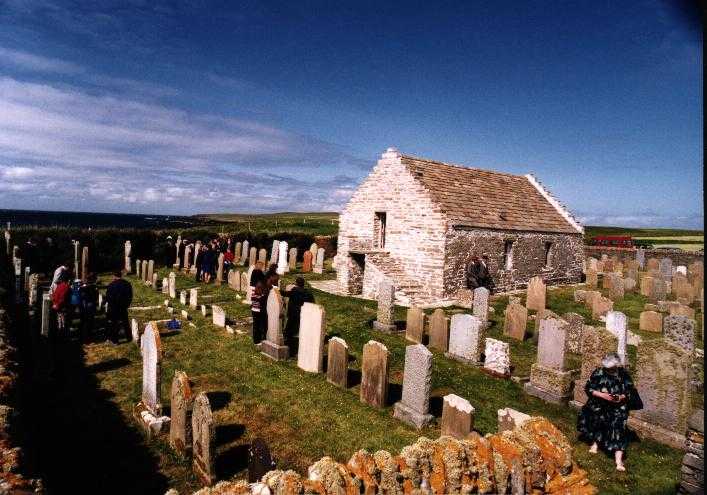 St Boniface Kirk now restored, St Boniface Kirk is set in an important ecclesiastic site dating back to the 8th century. It stands above the rocky shore towards the north west of Papa Westray. It has Iron Age, Pictish and later remains nearby, dating from the 6th century BC to 12th century AD. A Norse hog-back gravestone and two Early Christian cross-slabs found in the Kirkyard all combine to indicate a site of great significance.